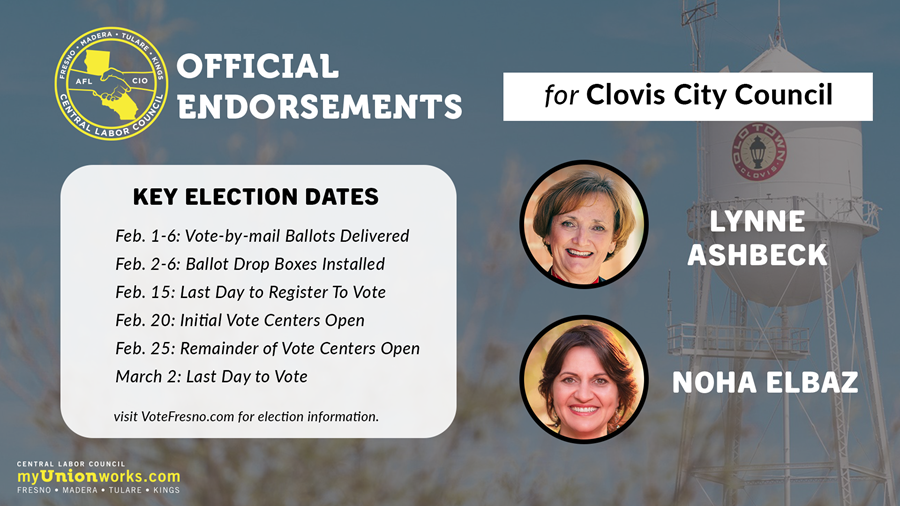 The Central Labor Council has endorsed Lynne Ashbeck and Noha Elbaz for Clovis City Council in the upcoming March 2 Election. The CLC confirmed the endorsement at the Delegates meeting on Jan 27, 2021.

Ashbeck, a five-time incumbent, and Elbaz, a first-time challenger, are seeking the two at-large council seats in a field of five. The seats are nonpartisan.

Lynne Ashbeck has served five consecutive terms since she was first elected in 2001, and has served as mayor of Clovis twice. (The City of Clovis has a rotating mayor among council members every two years).

Noha Elbaz has lived in Clovis with her family since 2013 and is a mother of two boys who attend Clovis Unified Schools. Elbaz ran for Clovis Unified School Board last fall, and came 2.9% shy of unseating the incumbent in that race.The Central Labor Council strongly believes Elbaz and Ashbeck are the best choice for working families in the City of Clovis.

Vote centers will open this Saturday, Feb. 20, and the remainder will open Feb. 27 every day through Election Day on March 2.

For more information, go to fresnovote.com.